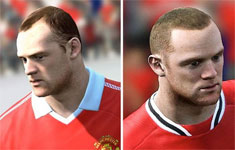 While it might be too late to shoot a new box cover for the UK version of FIFA 12, Electronic Arts managed to give Manchester United striker Wayne Rooney’s in-game model a quick makeover to reflect his recently transplanted hairline.

Wayne Rooney has apparently been candid about his hair transplant, so I guess it is only fitting that the video game character representing him was updated for his new look. I think the new hairline still looks a bit too high (based on the photo in the article), but I would know for sure if we got a picture of his wrinkled forehead when he looks up.

Patients After Hair Transplantation (with Photos)
My Hair Grows Extremely Fast -- Will New Transplants Grow as Quickly?
How Soon Can Shock Loss Start After a Hair Transplant?
Short Haircuts with Strip Surgery vs FUE?
Should My First Hair Transplant Be FUE and Save the Strip Method for Later?
The ISHRS Compares Strip Harvesting and FUE
Get a virtual consultation with Dr. William Rassman and Dr. Jae Pak for hair loss options. You can learn more by scheduling an appointment.