This patient clearly had an FUE in the past. I know this because I see the FUE scars (the missing areas) which I placed some arrow so that you can identify the scars from the older FUE this patient had.  What I am seeing is that the surgeon, having already almost maxed out the FUE extractions from the permanent zone in the donor area, decided to move up outside of the permanent zone for more extractions. That means that if this man should develop a Full Class 7 pattern of balding, that he would then lose all of these new hairs.  Also showed some arrow above the line I drew to show that this area was previously harvested as well.  The circled area shows an FUE sites where the hair still is in the scalp as it is all over the newly harvested areas (the surgical team has not yet removed the FUE grafts). Now add to this that as he loses more hair in the donor zone where his FUEs were wrongly done, he will have terrible scars on the back of his head that everyone will see (scar-less surgery?).

I strongly believe that the FUE harvest should be restricted to the REAL permanent zone (below the line I drew) and not above the line because these guys don’t expect to lose the transplanted hair in the years to come (a real possibility). 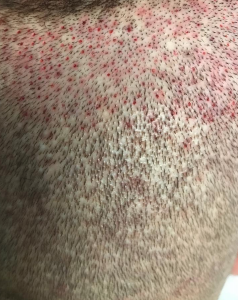 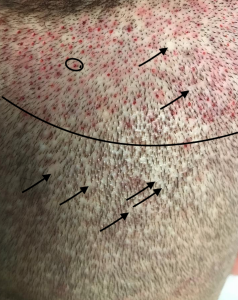 Teenager with Low Iron, Dandruff, and Hair Loss
Would Any Product Work for Treating Traction Alopecia?
I'm 18 and losing hair, should I take Propecia?
Advanced Balding in Young Man
Am I a good candidate for a hair transplant? I am 29 years old (photo)
How Do You Reverse Or Fix A Bad Hair Transplant Plug? (Before After Photos)
Get a virtual consultation with Dr. William Rassman and Dr. Jae Pak for hair loss options. You can learn more by scheduling an appointment.