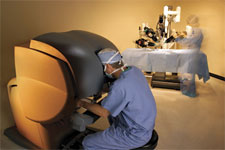 My first cousin just had a diagnosis of prostate cancer. With my help, we explored his options. He is 67 years young and his father lived to 96, and many on both sides of his family lived into their 90s and 100s. This is important, because the decision on which treatment to take for the cancer depends upon your life expectancy. Many men over 70 are pointed to non-surgical treatments, because their life expectancy is in the 10 year range so the value of surgery over radiation (radioactive seeds) or â€œwatchful waitingâ€ is not clearly defined compared to the risks of surgery. You don’t want your surgeon to use actuarial tables alone in deciding whether surgery is right for you.

In my cousin’s case, we selected a radical prostatectomy with a new technique using the da Vinci robot directed surgery. The surgeon does surgery from another room, all through the use of telemetry and robotics. The surgeon most skilled in this technique is Mani Menon, MD, based at the Henry Ford Hospital in Detroit (my cousin flew from Washington DC for the surgery and will fly back out for the post surgery follow-up). Dr. Menon has personally done over 2,000 such surgeries and his complication rate is the lowest in the world. His extensive pioneering research and experience on nerve sparing techniques results in a lower incidence of complications, such as erectile dysfunction (ED), in particular, and incontinence. My cousin could have had the surgery done locally at much less cost with surgeons who had some experience (20 – 200 surgeries) with the robot. There is no substitute for experience. For more information on the da Vinci surgical robot, see DaVinciProstatectomy.com

He just had the prostate surgery yesterday and said it was easy with no pain. He thought that the entire process was first class. Of interest, his older brother had the same surgery with a local doctor just a few weeks before and did not have as smooth a course with the surgery. I don’t know and can not say that this is an apples to apples comparison, but my cousin thinks it is. He is now 24 hours from his surgery and is already walking around and being discharged from the hospital as I write this blog. Had finasteride been around for 20 years and had he taken it, it may have reduced his risk for developing prostate cancer (better than a slick surgery, of course).

What does this have to do with hair transplantation? Unfortunately, hair transplant surgery is fast becoming a commodity as more and more doctors enter the business and drop prices to lure patients into their practices. If you were my cousin, would you accept a discount from a local, less experienced surgeon rather than pay higher fees and endure travel expenses and associated inconveniences? Does it pay to travel to get the surgeons who are the leaders in the field? My cousin thought that some years ago when he traveled cross country to California to have his hair transplant surgeries done at NHI.

Here are some questions you should ask yourself when choosing your hair transplant surgeon:

Case in point, I just met with a patient who had a terrible hair transplant. I asked him about the doctor who did it and he told me that the plastic surgeon who did the procedure was a relative of his and was willing to do the transplant at no cost to him. He thought he got the deal of a lifetime. This is a family connection that is now in trouble. Some plastic surgeons who do not have substantial training in hair transplantation and do not have an experienced team working with them, will fail at getting the results that are possible. There are no real bargains out there, and often, the old saying ‘that you get what you pay for’ is hard to learn.