A clinic posted two pictures and labeled one as theirs and the other as the competitor. What you are looking at nothing more that two examples of different hair transplant densities. The one on the left had twice the density as the man on the right and probably paid twice the cost. The advertising is clearly misleading and I suspect that it was a set-up because both sides look like different sides of the same patient. The surgeons then would have added more density after the photo on the right was taken so as not to victimize his patient. 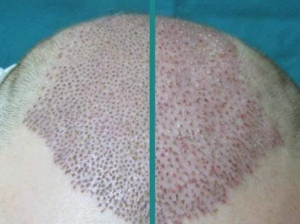