These bald characters are clearly different than ordinary hairy men. Some of funny characters and some are made to look mean but they are all different than we are and that is what makes them different.  Our society has stereotypes and we know that because since Eisenhower, no president has been elected without hair which says that society has a great, innate trust and respect for men with hair. About 15 years ago, I ran a radio show called the Inner Man. We discussed all types of men issues. One day I did a segment on hair and a Vice President of Sales and Marketing from a big company (he wouldn’t name the company) called in to tell us that he would never hire a bald man because they could not be trusted. He added that he was bald but did not fit the mold because he was the exception to his rule. Think about that one! 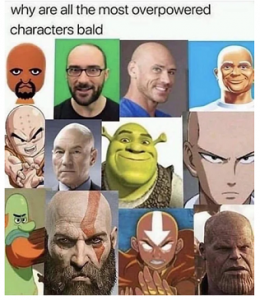 In I have ED and am about to start finasteride, will medications help?
I'm 21 and already have crown loss (photo)
Why Do I Have To Wait 30 Days To Donate Blood After Stopping Propecia.
Waking Up Each Morning With More Eyebrow Hair Gone
Restoring Damaged Hair Roots, Since It Hasn't Regrown in Over a Year?
Wrinkles, Shock Loss
Get a virtual consultation with Dr. William Rassman and Dr. Jae Pak for hair loss options. You can learn more by scheduling an appointment.