I put dots on the left side of this man’s hairline to show where his hairline probably was when he was 12 years old.  The movement of the hairline upwards from this dotted line is where the mature hairline develops.  The juvenile hairline would extend from the bottom of the widow’s peak to the temple points.  The widow’s peak is a genetic remnant of the juvenile hairline which shows nicely in this photo. IF this man got photos when he was 12 years old, I suspect that he would see a rounded concave hairline as I just described. Now what we see is a mature hairline with a gentle V-shape that hopefully will stop receding here. 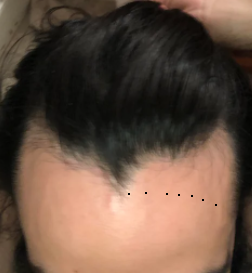 Is Platlete Rich Plasma (PRP) valuable and what scientific proof is available?
Patient presents with pimples and a pink color throughout the recipient area at 20 days (photo)
Can Standing on Your Head Grow Your Hair?
5 times SMP failed
Splitting Daily Finasteride into Two Doses
Child Alopecia
Get a virtual consultation with Dr. William Rassman and Dr. Jae Pak for hair loss options. You can learn more by scheduling an appointment.