This 23 year old male who wanted to find out if he was a good candidate for a hair transplant. His present Norwood pattern of hair loss is an early Class 3 pattern.  At 23, I normally would not offer hair transplants to someone of his age because: (1) the balding pattern is not completely defined at this age, see example here: https://baldingblog.com/need-master-plan-think-hair-transplants-photos/), (2) I usually ask myself the questions “can he support a worst case Class 7 balding pattern if it should occur?”, (3) his hair thickness is very coarse (see example here:  https://baldingblog.com/hair-thickness-vs-density/) and (4) his level of maturity in accepting the advice of a doctor like me appears reasonable as we worked on the plan shown here together and he understands that his final balding pattern is poorly defined at this time.  I asked him to map out his head and with a hand microscope purchased from Amazon, he mapped out his head and gave me detailed microscopic views of his hair in different parts of his scalp.  The pictures here show that there is some early miniaturization in the frontal area (first set of photos) and that his donor density when calculated by me, showed that his total hair count (total hairs on the head) is approximately 160,000 hairs (an average Caucasian has 110,000), and that he averages 3.2 hairs/follicular unit (or graft). The average Caucasian has a follicular unit hair count of 2.2 hairs/follicular unit (or graft). His available hair is 50% higher than the average Caucasian. That puts his donor graft supply very high.  In addition, he purchased a micrometer from Amazon (at my suggestion) and measured his donor hair thickness (he cut 6 hairs from area [CD] on the third set of photos). His hair thickness measured 72 microns which means that he has a coarse hair.  From a Personalized Master Plan perspective, if he was to progress even to to a Class 7 pattern (the most advanced hair loss pattern), he would have enough hair to transplant his entire head. His hair has a high hair mass capable of covering a huge area of his head, if he should bald further at sometime in the future which is likely from what I see on the various maps he provided to me. At this time, all of his miniaturization is confined to the frontal area of the scalp and the frontal corner hairline. 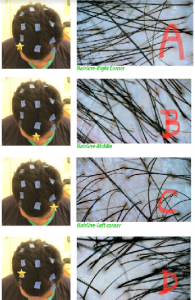 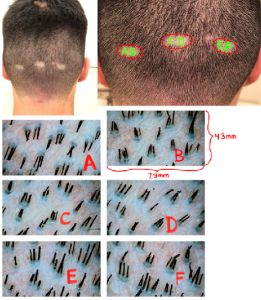 scabs should come out by itself, don’t try to remove them on purpose. I can’t tell if they are grafts or scabs from your first pic. I hope they are scabs.. My scabs didn’t come off until day 15th.

This is what I like to see immediately after the surgery and the days following the surgery.  The post operative washing process should produce results without scabs like these:

There is a risk of removing mature scabs prior to the 12th day. I wrote about this in a medical publication here: https://newhair.com/wp-content/uploads/2018/11/mp-2006-graft-anchoring.pdf

This is an amazing result from finasteride alone. I don’ believe that I ever saw such remarkable growth in just 9 months.

It’s expensive when compared to the oral pills. Dutasteride is not FDA cleared for hair loss so doctors don’t write the Rx for it very often. Topical finasteride in the liposomal form costs around $70/month. The finasteride pill from Costco costs about $27/year. Big difference

If it is not approved in the US, doctors will not write an Rx for medical-legal reasons. For example, if someone gets post-dutasteride syndrome, then there is no legal protection for the doctor for legal action taken by the patient.

Doctor, if you get a hair transplant, do you have to take fin and minox? Or are you solid to discontinue?

I feel like my rate of loss isn’t as bad as my grandpas and line’s up better with my uncles. However they lost more overall than my great grandfather, which I attribute to their father’s influence. Neither of them were as bad as his though. I can’t tell if they had crown loss like I do, my uncles seemed to just recede from front to back while I started at the crown and eventually the temples. I believe my grandfather was a diffuse thinner.

Best case scenario is that I take exactly after my great grandfather, his hairline was fairly far back but it looked more or less like a full head of hair, kinda Richard Nixon territory. -but considering he started losing hair about… 100-ish years ago? There’s not many people I can query about regarding the rate it happened. Nor any pictures where I can see his crown.

Today, drugs like finasteride which slow down the loss were not available with your grandfather or other relatives, so you can modify your end balding stage and with a good hair transplant, you can bypass what happened to them.  Look at yesterday’s  post about a 10 year finasteride study, it shows that men with less severe hair loss, may gain hair with finasteride.

The nice thing is my great grandpa didn’t even need it. Since his stopped in a decent NW3 position. My uncles on the other hand, lost more over time. From what I can tell my uncles didn’t have crown loss, so I either have my grandfather’s or great grandfather’s hairline.  My cousin has our grandfather’s full-on baldness. If I can get a clue as to how early it happened for him and in which pattern. I think I might be able to crack this.

You are going about trying to find out your final pattern of balding correctly!

This graph taken from the article below, tells us a great deal about long term finasteride use by pattern of hair loss.  Look at the stabilizing effect on the progressive nature hair genetic hair loss once the pattern has been achieved (about 5 years into the study). It appears that many of the less advanced patterns of hair loss, have even gained some hair over the 10 year study. 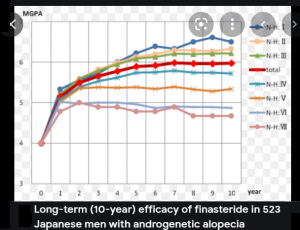 Hi, I began fin 2 months ago and my hair is significantly worse. It’s really thinner and my hairline is more receded than before. Also, I’ve a lot more sex drive like never before. I dont know if it’s a shed or if fin is having the opposite effect on my body.

Stick to the finasteride and it should slow down the loss. You are one of the lucky guys that get’s an increase in libido with finasteride

First, check with your mom and the other females in the family (grandmothers, aunts, sisters, etc..) and see if they had the same situation in their 20s as this condition is often inherited on the female side of the family. You need to get a good doctor and a good examination of your hair with a trichoscope which shows classic genetic patterns in the area around the sides and back of your head.

As these test may point to a cause other than genetic

A healthy diet can help your hair stay strong and shiny. What you eat can also keep you from losing your locks. If you’re not getting certain nutrients from food, you might see the effects in your hair.Essential fatty acids, especially omega-3s, play a key role in the health of your skin, hair, and nails. You should eat some of these foods, which are rich in omega-3, every day:

Vitamins B6, B12, and folic acid are also important to your hair. Vegetarians and vegans often don’t get enough of them.

Foods with B6 include bananas, potatoes (both white and sweet), and spinach. Major sources of B12 include meat, poultry, fish, and dairy products.

You can get folic acid with plenty of fresh fruits and vegetables, especially citrus fruits and tomatoes. Whole-grain and fortified-grain products, beans, and lentils also have it.

Protein is also critical for keeping your hair healthy, but many people don’t get enough. Lean meats like fish and chicken, eggs, and soy products are good sources. Eat one serving every day.Because trace minerals like iron, magnesium, zinc, and biotin also affect hair, it’s a good idea to take a daily multivitamin.The right foods can be really good for your ‘do, but hair loss has many causes. Sometimes, genetic factors like male or female pattern baldness can play a role. Thyroid disease, anemia, autoimmune diseases, and hormone issues may also cause changes or loss of hair.

I think because of better social media, we are more aware of balding today and we are sharing the problem with others. I don’t believe that we moved the needle on balding

This has been done before. I remember attending a lecture which described these cells put into mice and since the direction couldn’t be controlled, the mice all died from ingrown hair infections

With just the use of finasteride and minoxidil this man got almost complete reversal of his hair loss.  He shaved his head to get the minoxidil to apply to the scalp more effectively 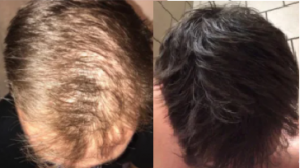