Every person, every mouse, every dog, has one unmistakable sign of aging: hair loss. But why does that happen?

Rui Yi, a professor of pathology at Northwestern University, set out to answer the question.

A generally accepted hypothesis about stem cells says they replenish tissues and organs, including hair, but they will eventually be exhausted and then die in place. This process is seen as an integral part of aging.

Instead Dr. Yi and his colleagues made a surprising discovery that, at least in the hair of aging animals, stem cells escape from the structures that house them.

“It’s a new way of thinking about aging,” said Dr. Cheng-Ming Chuong, a skin cell researcher and professor of pathology at the University of Southern California, who was not involved in Dr. Yi’s study, which was published on Monday in the journal Nature Aging.

The study also identifies two genes involved in the aging of hair, opening up new possibilities for stopping the process by preventing stem cells from escaping.

Charles K.F. Chan, a stem cell researcher at Stanford University, called the paper “very important,” noting that “in science, everything about aging seems so complicated we don’t know where to start.” By showing a pathway and a mechanism for explaining aging hair, Dr. Yi and colleagues may have provided a toehold.

Stem cells play a crucial role in the growth of hair in mice and in humans. Hair follicles, the tunnel-shaped miniature organs from which hairs grow, go through cyclical periods of growth in which a population of stem cells living in a specialized region called the bulge divide and become rapidly growing hair cells.

Sarah Millar, director of the Black Family Stem Cell Institute at the Icahn School of Medicine at Mount Sinai, who was not involved in Dr. Yi’s paper, explained that those cells give rise to the hair shaft and its sheath. Then, after a period of time, which is short for human body hair and much longer for hair on a person’s head, the follicle becomes inactive and its lower part degenerates. The hair shaft stops growing and is shed, only to be replaced by a new strand of hair as the cycle repeats.

But while the rest of the follicle dies, a collection of stem cells remains in the bulge, ready to start turning into hair cells to grow a new strand of hair.\

Dr. Yi, like most scientists, had assumed that with age the stem cells died in a process known as stem cell exhaustion. He expected that the death of a hair follicle’s stem cells meant that the hair would turn white and, when enough stem cells were lost, the strand of hair would die. But this hypothesis had not been fully tested.

Together with a graduate student, Chi Zhang, Dr. Yi decided that to understand the aging process in hair, he needed to watch individual strands of hair as they grew and aged.

Ordinarily, researchers who study aging take chunks of tissue from animals of different ages and examine the changes. There are two drawbacks to this approach, Dr. Yi said. First, the tissue is already dead. And it is not clear what led to the changes that are observed or what will come after them.

He decided his team would use a different method. They watched the growth of individual hair follicles in the ears of mice using a long wavelength laser that can penetrate deep into tissue. They labeled hair follicles with a green fluorescent protein, anesthetized the animals so they did not move, put their ear under the microscope and went back again and again to watch what was happening to the same hair follicle.

What they saw was a surprise: When the animals started to grow old and gray and lose their hair, their stem cells started to escape their little homes in the bulge. The cells changed their shapes from round to amoeba-like and squeezed out of tiny holes in the follicle. Then they recovered their normal shapes and darted away.

Sometimes, the escaping stem cells leapt long distances, in cellular terms, from the niche where they lived.

“If I did not see it for myself I would not have believed it,” Dr. Yi said. “It’s almost crazy in my mind.”

The stem cells then vanished, perhaps consumed by the immune system.

Dr. Chan compared an animal’s body to a car. “If you run it long enough and don’t replace parts, things wear out,” he said. In the body, stem cells are like a mechanic, providing replacement parts, and in some organs like hair, blood and bone, the replacement is continual.

But with hair, it now looks as if the mechanic — the stem cells — simply walks off the job one day. 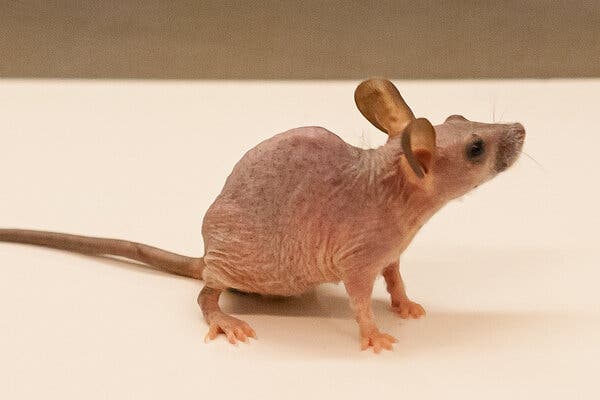 But why? Dr. Yi and his colleagues’ next step was to ask if genes are controlling the process. They discovered two — FOXC1 and NFATC1 — that were less active in older hair follicle cells. Their role was to imprison stem cells in the bulge. So the researchers bred mice that lacked those genes to see if they were the master controllers.

By the time the mice were 4 to 5 months old, they started losing hair. By age 16 months, when the animals were middle-aged, they looked ancient: They had lost a lot of hair and the sparse strands remaining were gray.

Now the researchers want to save the hair stem cells in aging mice.

This story of the discovery of a completely unexpected natural process makes Dr. Chuong wonder what remains to be learned about living creatures.

“Nature has endless surprises waiting for us,” he said. “You can see fantastic things.”

https://baldingblog.com/wp-content/uploads/2017/09/logo-small-300x62.png 0 0 William Rassman, M.D. https://baldingblog.com/wp-content/uploads/2017/09/logo-small-300x62.png William Rassman, M.D.2021-10-10 10:23:492021-10-10 10:25:12New Your Times Article Giving Insight into Hair Stem Cells
Use a surgical sponge without soap, then dip it into a shampoo solution and make a lot of suds. With the sponge full of soapy shampoo, roll if back to forward on the grafts. Press on the sponge. Little squirts will come from the holes in the sponge and take off all scabs. Repeat it until it is clean. If any scabs remain, then get a Q-tip, dip it into the shampoo water and roll in over residual crusts over and over again until takes off the last of the scabs. Repeat this daily to keep the scabs off. You will look clean of scabs if you follow this routine. Read my article on graft anchoring here: https://newhair.com/wp-content/uploads/2018/11/mp-2006-graft-anchoring.pdf

This Mummy found in Chili dates back to 7200 BC.  It is clear that he had a good head of hair that lasted a long time. 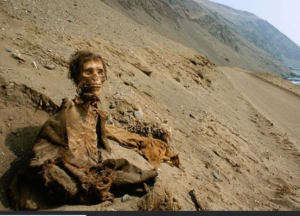 i’m 19 and she is 18 and we’re both going to be sophomore in college next year and she is going to dorm next year and im worried that we won’t be together because i’ll become too far gone and she will find someone with a really nice head of hair and obviously a personality and whatever. i happen to think i have an amazing personality but this hairloss would make me look, ugh idk like very unpresentable

Sometimes you need to challenge a relationship to find out its value. If your girlfriend would leave you simply because of hair loss, then she is shallow. You have value well beyond your appearance and your hairline. Think about that and if she goes away, she is not worth keeping

I am contemplating laser hair removal, but i think that traditional laser doesn’t destroy the entire follicle, so it might regrow if i keep taking the treatment. You don’t have patient with this concern of hypertrichosis with low dose OM?

I have only started it recently on patients so I know more about what I read than my personal experience. Laser hair removal only removes anagen hair and for most body hair, half of these hairs are in telogen at any one time so at most you get half of the hair follicles with the laser

A little over a year of being on 1mg finasteride pills and using 5% minoxidil once daily. Not much hairline progress since my last update, but my hair has thickened significantly. Extremely happy with these results.

It has thickened because you took finasteride and minoxidil and probably reversed the miniaturization that might have progressed to hair loss. Nice! 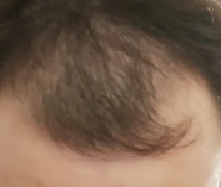 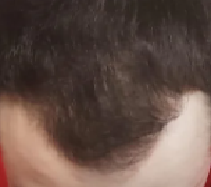 Am I a good hair transplant candidate?

Yes, you may be an excellent candidate for a hair transplant because you have a persistent juvenile hairline which doesn’t need to suck up grafts and the grafts can be distributed to more easily cover the balding area on top and in the crown. 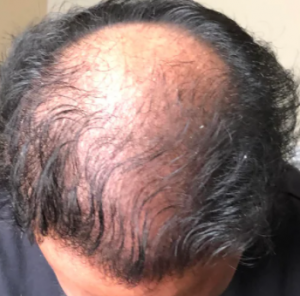 When I see an SMP like this, I must assume that this man wanted this look and found someone to do it for him because I can’t imagine any professional would do this voluntarily. I wouldn’t do it if I were asked, not for any money! 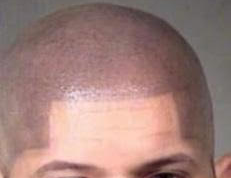 This is a unique way of looking at age related hair loss.  I am not sure how genetic hair loss fits into this hypothesis.

Hi I’m a 24 year old female and one night I got stressed and started plucking hairs at my hairline. This is the first and only time I’ve ever done this. It happened January 24. It’s been almost 2 months now and absolutely no regrowth has even started. I don’t even see little black dots appearing Will they ever grow back? When? They was the only time I’ve ever plucked those hairs out. I’m so nervous

A single plucking will not result in permanent hair loss. I had a patient who was mugged and held by his hair. At the end of the beating they pulls out his entire frontal hairline and he was devastated. It all grew back within 6 months. You hair will likely grow within 6 months of the plucking

The hair appears thicker on the right after the 19 months on finasteride but it is hard to be sure from the photos alone.  It would be better to have done a HAIRCHECK test  before and after the 19 month timeline. This gives an objective measurement of the hair bulk increase, if any, see here: https://baldingblog.com/haircheck-test-how-it-is-done-video/ 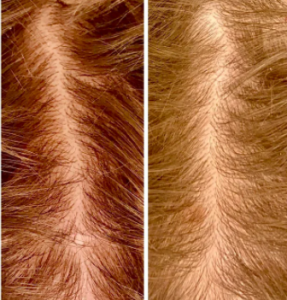 Saw Palmetto is a very weak DHT blocker.  I can’t explain the numbers you are reporting with your testosterone levels. What did your Urologist tell you?